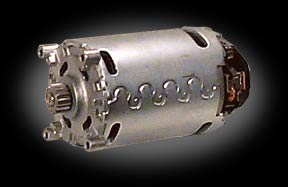 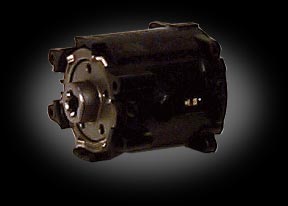 
as the only person to have currently used the Dewalts in a drivetrain in australia here is some advice i have found along the way that will serve in handy should you wish to also use the drives.


The dewalt motors are timed at between 10 - 15 degrees meaning they will rotate faster in this direction. it is perfectly acceptable for a drill but is troublesome in a robot drive train as they will try to make the robot spin when you apply full power to the motors in order to make it drive straight. this effect was not particularly noticable at robowars as the floor was low in traction, however on the grippier go kart track the effect was basically an uncontrollable robot. you must either get a gyro, re-time the motors to neutral OR calibrate the victors and trim the radio in such a way as to counteract this effect.

When i first got my dewalts i tested them for current consumption just to make sure they where normal. one motor was a normal 3 amps or so continuous but the other was a stupid 7 amps when it should be 2.6-3. i ran the motor unloaded for 10 minutes in each direction with a fan on it to stop it heating up at 12v and this dropped the current to a 5 amps. still to high. As the robot was driven the motor and gearbox seemed to wear in and now both motors go around 3 amps (in reality the other has a higher current due to the timing).


- SOLDERING WIRES TO THE TERMINALS.

This is probably the trickiest thing with the dewalts. the terminals sit vertically beside the brushes and make it ultra difficult to solder the wire on as the casing of the motor interferes with the soldering iron when your trying to insert it in there to make the join. i ended up having to use a 15w iron to do it. Take extra care when putting these wires on, i had them snap off at the solder join so strain relief is needed.

These are a total bastard! i tried about 3 times to do it myself and in the end called in the expert help of Nick Martin to do the job. heres a good trick he used. basically got some appropriately sized grub screws with little spikes on the end, threaded them into the holes then sat them on the base in there positions and tapped them with a hammer so they left dents which could be further center punched and drilled. worked perfect! a point is that the holes for mounting are stupidly close to the edge of the moun.

While the dewalts are technically awesome they do have limits. and in my experience i would limit wheel size to no greater than 4" (95mm diameter) any more and the backlash in the gearbox would be destructive and make the robot difficult to drive. any larger wheel than 4" whilst in high gear would also make the robot impossibly hard to drive on account of the insanely high speed. this only applies if you run the wheels of the drive shaft.

The dewalts WILL heat up to very high temperatures ~ 70 - 80 degrees and more. i ran 3" wheels off a pair of 18v dewalts in high gear powering through twin 12v 2.4ah nicad packs in series and after a 3 minute fight the motors where totally untouchable. i used a small heater on cool function to cool off the motors. they came back to room temp in about 10 minutes. i can only advise caution if you plan to run 4wd or 4" wheels.

on the above mentioned setup in cobra i was draining a consistent 1700-1900mAh of battery capacity per fight. the robot was being driven at next to full power at all times and pushing alot. the batteries came out untouchable as well but the fan cooled those off to room temp in about 50 minutes whilst charging at 3 amps. the CP2400SCR are a great match for a drivetrain similar to King Cobra.

Simple advice, avoid at all costs! they are poorly designed and difficult to install. basically they will crush your gearbox casing and jam the gearbox if you attempt to tighten them any significant degree. i left them loose in cobra so the motor could move slightly but not to a dangerous level. there have been cases of motor magnets shattering so this could be a good way to prevent it? but make your own clamp mount around the motor that DOES NOT obstruct the effective cooling system in the dewalt motors.

Long story short. there is nothing available for featherweights today in such a ready to run form that is as powerful, light and reliable as the dewalts. at about 1kg per side of the drive in cobra which includes tool steel shaft, twin 10mm aluminium bearing blocks and large 3" x 1" colson wheel these are some 500g lighter than a 100w scooter while providing about 10x the wattage. Reliability. i drove cobra at stupidly hard levels in 6 fights over 2 consecutive days and never had one problem. not even a slight hiccup. flawless.

The power output is also nothing short of impossible. it was powering itself and another featherweight sitting on top of it at somewhere near 15mph into the walls and this is only a two wheel drive robot. many if not most 4wd robots in the country cannot even get close to that. i also had it pushing Plan G fowards against its own power which uses two large mini evs at 24v and 4wd.

Accelleration is awesome. it gets to 16mph in about 1/2 the length of the robowars arena which is about 7m across IIRC. and that is very pessimistic. with 4wd i can only imagine the performance.

DEWALT DISSASSEMBLY AND GEAR CHANGE FROM LOW INTO HIGH GEAR


well i got the time to take apart my dewalts finally so i took a good amount of pictures so i remembered how it went back together.. so ill post them here for all who are interested in the dewalts.

First things first heres the rear of the support kit. it supports the motor to the gearbox and the two little insulators stop the brushes shorting out to it, made from 6061 and light as heck.

Heres the rear end of a dewalt. notice the brush mountings there, im sure there garolite like in nicks packs.

Size comparison, these things are in a whole new league to the little 550s you see next to the dewalt.

Diameter comparison. the face plate on the xu1 is barely as big as the dewalt motor alone lol, notice the size of the gears as well. far more sturdy.

Heres the top of the dewalt gearbox. that little plate is really well mounted and required to screwdrivers to prise it off. those little tabs you see lock into the case and this is a similar feature throughout as the ring gears employ a similar mounting method. also to be noted is how light the mount and gearbox is, definitely as light as an xu1 gearbox and this is with a milled aluminium housing. most of the weight is in that hefty motor.

Without the anti-crap plate on (highly technical). 5 steel gears and 5 steel pins about the same size as on the xu1s. note how the ring gear is held in with the tabs and is very secure. again it needed two screwdrivers to remove it.

Without the gears. that green ring gear is also plastic btw.

First stage metal gears compared to an XU1 metal gear. they are smaller but they are presumably better quality metal and there are more of them too Smile

Here is no doubt the most impressive piece in this thing. the first stage gear carrier. this is the underside of it. note that in low gear the teeth on the outside of this gear carrier do not engage (the green gear is raised above the teeth by the low speed locking ring). That gear is massive.

Without the first stage in. you can see here the second stage and the first ring gear on top (green and plastic), the low speed locking ring underneath it and then the yellow ring gear on the bottom. to convert the gearbox into high gear you need to remove the low speed ring and flip that yellow gear over.

Without the first ring gear, the lathed out low speed locking ring evident. Team Delta really put some work into these kits.

Without the low speed locking ring. note the hefty pins, defintely a bonus!

final ring gear flipped over for high speed operation, this raised up both the ring gears so they engage with the first stage carrier. this is what makes it run in high speed.

with the first stage carrier back in. this now engages with the second ring gear. that is some awesome engineering work to get everything to work out like that. my compliments to the designers Smile

in with the gears and the last ring gear, where in 15:3 ratio now!

hope you enjoyed that as much as i did Cool

P.S. the difference in efficiency between high and low gear is amazing. in low gear in needed a pair of vice grips to turn the shaft, but in high gear i can easily turn it with my hand.

There are no comments on this page. [Add comment]